This guide provides information about the implementation of the presentation layer (also known as a "graphic interface" or "user layer") of a Commerce using LogiCommerce Framework for PHP.

First of all, it gives an overview of the software used, as well as the architecture and logic applied. Next, it explains the basic circuit for a request, giving a general idea of how the application works.

Throughout the guide intermediate/advanced knowledge of the object-oriented programming paradigm is assumed, as well as knowledge of Twig and PHP language.

Below is a list of the software and components used to develop the Commerce's presentation layer.

The LogiCommerce FWK bases its whole functioning on LogiCommerce API Headless. Access to this API is necessary for the system to operate normally.

All the LogiCommerce FWK code is developed for PHP version 7.4 and, by extension, first-party code and that of the Commerce will also work in the same version.

The following modules are added to the PHP engine:

The Commerce's website has a cache layer managed by the Varnish version 4.0 application.

The Commerce's website has Redis as a service for storing data in memory, used to store sessions (persistent information between requests) and as an object cache.

Each project consists of 3 blocks of code. Two of these repositories are provided by LogiCommerce; the third consists of the Commerce's own, first-party code.

The logic used to structure the different parts of the code is outlined below.

T his is LogiCommerce's own SDK in its Cloud distribution and represents the lowest-level component. It deals with encapsulating the direct logic of interaction with the LogiCommerce API and, in many cases, simplifies the implementation of certain complex processes.

It also contains all the commonly-used classes valid for any framework written in PHP. However, in this guide we will focus on LogiCommerce's own framework.

The LogiCommerce SDK is divided into 4 blocks:

This is LogiCommerce's own framework in its Cloud distribution. It deals with managing and interacting with the information returned by the LogiCommerce SDK and introduces a logic layer related to the most common processes in a Commerce.

The purpose of this FWK is to unify processes and centralize them according to a single operating criterion. As from a logical point of view it stands between the LogiCommerce SDK and the Commerce's first-party code, it brings functions together and standardizes habitual processes.

The system is based on MVC (Model-View-Controller), so it is structured in two broad blocks:

This directory contains the Twig scripts used to display the response. These scripts are conceptually divided by themes. The FWK contains two of them by default:

This directory contains the PHP code for the FWK. This code is divided into the following directories:

This block contains the definition of everything to customize each of the projects according to their individual operating and design specifications. Commerce code obeys the same logic in terms of directory structure as the FWK, as it is considered an extension of the FWK. For this to work, any overwriting of Commerce code must be in the same path as its homonym in the FWK.

Like the FWK, it is based on MVC and structured in two broad blocks:

In this directory are the Twig scripts used to display the response. These scripts are divided into themes and there is a directory for each of them. The sub-levels in this area are described in more detail in the "Twig Theme Structure" section.

Regarding the directories created at this level, it is important to take into account that the directories for the Core and Internal themes are an extension of the FWK, so the scripts defined in them will overwrite their homonym in the FWK.

This directory contains all the static content that makes up the project, structured in areas. These are the main areas:

The file assets.json will also be used in the process of merging production files, unifying all the references indicated in the files block. For example, all the references to files there may be in commerce → css → default → files will be put together in a single file, and also, according to the instructions in the relevant minify attribute, the resulting file will or will not be minified.

In the root directory there are two essential PHP files:

Logic of a Request

Next, the basic stages in a request within the code are explained; putting the request through.htaccess rules, cache or router systems is avoided. 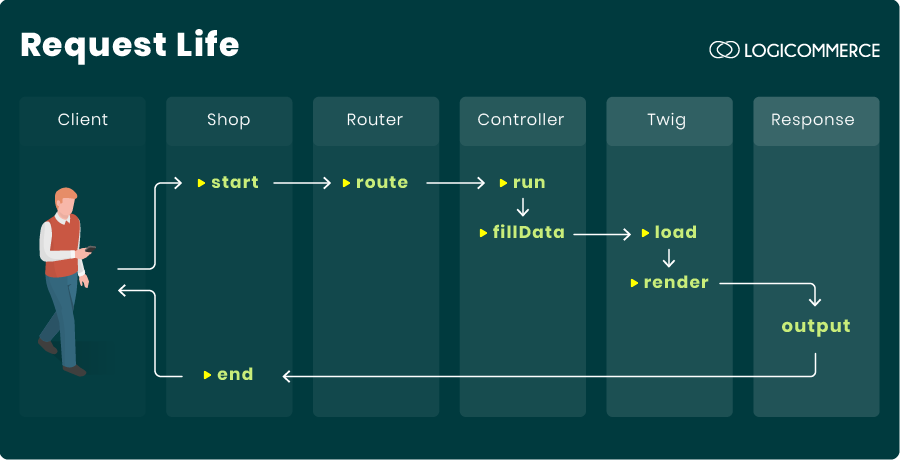 This file is the gateway for all requests to the project. It loads the project configuration (_config.php) and then the LogiCommerce SDK and FWK repositories. Once all the code is assembled, a Shop-type object is created, and this initiates the processing of the request.

This object deals with initializing, loading, and managing the main components used to process the request. To do this:

The project uses the native PHP session system, but to control the information saved and maintain a proper match between the data, $_SESSION is only accessed through a first-party class called “Session”. This class deals with managing everything stored and obtained from $_SESSION. On initialization, if a session is not yet available, empty objects are assigned to Session and then used to store information such as the user, viewing theme or items for the comparator.

At this point in the session we have a session and a connection with the LogiCommerce API. Next, this request is analyzed. To do this, an instance of the Router object is created from the Shop object.

In this class the path of the resource asked for in the request made by the client is analyzed and it is determined which controller is to process it. First it is necessary to distinguish between two types of request:

Whether it is internal or external, at this stage in the request the system has the information to decide which controller is to be loaded. Therefore, the Controller object of the required type is created and the run message is launched.

According to the MVC pattern, the Controller object will get and calculate all the data necessary for the request. This information is obtained through requests against the LogiCommerce API, primarily using two strategies:

These two routes for requests that can be made against the API have been passed on to the controller in two functions that are executed automatically. This way, first the batch request is resolved so that the system has all the corresponding results, and then the information is complemented with single requests if necessary.

With all this information, plus calculations or logic resolved in the controller, a model key-value type table will be created, and this is sent to the Twig engine to then be used in the Twig scripts; by using the key the value can be accessed.

The Controller object will create the Twig engine using the TwigLoaderclass. This engine will primarily have five new blocks assigned to it:

A product helper, for example, could return, among other things, this product object converted to json under a particular format.

Finally, the response is interpreted. To do this, the Twig engine has the name of the theme to be loaded assigned to it, having got it from the path information. From this point, all the paths will be relative to this theme. Also, the appropriate template and layout are assigned, including the details of the output to be constructed.

Finally, the text resulting from interpreting is sent to the Response class.

This class deals with centralizing the response information. In the course of the request the headers to be returned in the response to the request have been added to this class, and now it has the body generated in the Twig engine.

The process therefore ends by assigning the headers of the request and its body. This completes the request cycle, it goes back to the Shop class and the response is returned to the client.

The Twig themes that the project will apply are divided into 5 types of element: 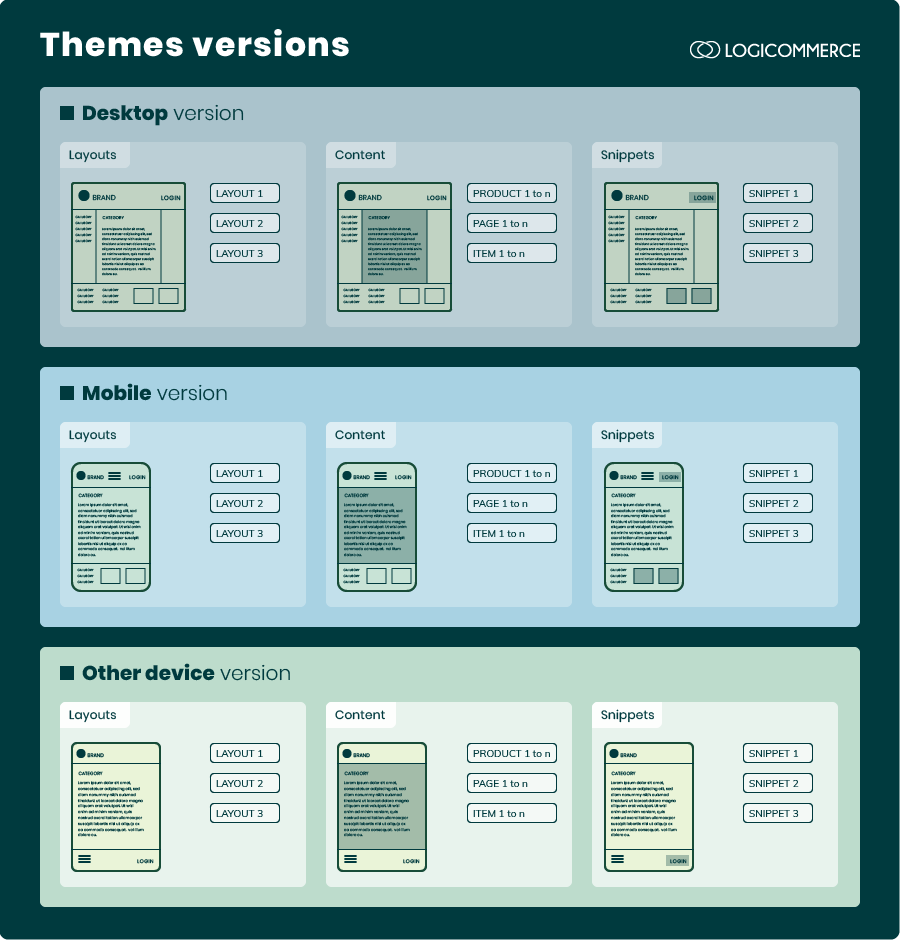 Within the project themes directory are the different themes and, in turn, for each of them, the different elements that make them up are included.

Themes may or may not have versions. If they do not have them, the layouts, content, and snippets directories will depend directly on the root for the theme. Otherwise there will be a directory for each version within the theme. Within each of the versions the respective layouts, content and snippets directories will be included.

Based on the controller type obtained through the Router object (as explained above) and the theme the latter assigns, the system automatically generates the paths to get the appropriate layout and content.

File name: This is defined in the Theme object with which TwigLoader was initialized. This value will be the main part of the Twig filename to be loaded, and to which the appropriate format must be added, for example "html", "js", "json", plus twig at the end. The full name could be "default.html.twig".

Filename: As with the layout, the content is defined in the Theme object, and likewise, its name will be followed by the format and "twig". It could, for example, be "default.html.twig".

Location: As a general rule, a content-type file is associated with a controller. For this reason, the same logic applies to its location as to that of the controllers, which are structured according to the element type.

Therefore, the directories to reach the content start with a capital letter, as do the packets and classes until the controller is reached. For example, the content associated with the product datafile controller would be: 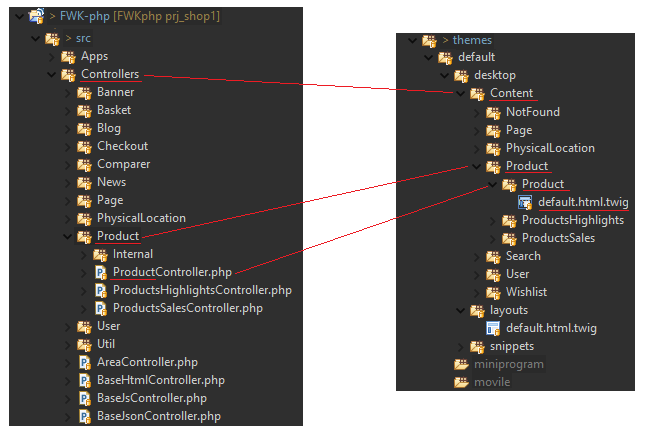